Windows Server 2016 is the next upcoming server operating system from Microsoft. A technical preview was released in November 2015, and the final version is expected to be released sometime around the 3rd quarter of 2016. if the final version hasn’t been released at the time you are reading this article, you can download the technical preview version from Microsoft at this URL.

in this article I try to list the most important features packed in Windows Server 2016. for full details of all the features contained in this release, please see the references below. 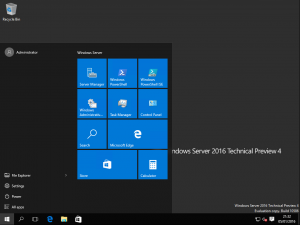 containers is not a new concept, they have been used in Unix for a long time, and they are very popular in Linux server deployments, take a look at Docker for example, but they are new in Windows, and most likely they borrowed the idea from Linux. what is a container anyways? to understand containers you need to have an overall understanding of what a Virtual Machine ( VM ) is first. because containers were born out of the need of solving some of the virtual machine issues, and one big issue about virtual machines is that they utilize a lots of resources. virtual machines run at the hardware level, every time you set up a new VM, you need to configure a specified amount of CPU, RAM and hard drive space to be used by that VM, when you stack-up a lot of VMs in a host, you can run out of system resources quickly. containers in the other hand don’t need resources to be allocated to them, they utilize the host operating system resources i.e. RAM, CPU and storage, etc. in other words, containers utilize less resources so you can run many more services from a host, than you do with VMs. so yeah, containers are new in Windows 2016, and I’m looking forward to it.

without stopping the Hyper-V or the Scale-Out File Server workloads. Using this feature administrators will minimize downtime greatly.

Resiliency Level: Helps you define how the transient failures are handled.

Resiliency Period: Helps you define how long all the virtual machines are allowed to run isolated.

Quarantine of unhealthy nodes: Unhealthy nodes are quarantined and are no longer allowed to join the cluster. This prevents flapping nodes from negatively affecting other nodes and the overall cluster.

Q. What is Work-group and Multi domain clusters?  In Windows Server 2012 R2 and previous OS versions, a cluster can only be created between member nodes joined to the same domain. Windows Server 2016 breaks down these barriers and introduces the ability to create a Failover Cluster without Active Directory dependencies. You can now create failover clusters in the following configurations:

Hyper-V also features some useful features in Server 2016. some of those features are:

Terminal services also features some good features in this release:

There are many more features packed in this Windows Server 2016 release. Please see the references below to see the full details.

What are the system requirements for Windows 2016?

Please notice that those are the minimum specs recommended by Microsoft to run Windows 2016, but in reality if you want to have a positive experience installing, and testing the OS I would double the resources listed above.

I didn’t include all the features packed in Windows Server 2016. Please look at the references below to get a full list. these features listed are are the ones I believe are the most important ones. Windows 2016 is great release, and I assume a lots of businesses will be upgrading to this release once it becomes available for production.