I haven’t used or even thought about installing an antivirus in a computer for a long time. I’ve been using Linux on my computer for such a long time that I forgot about Antiviruses completely. Linux is a wonderful operating system, but working in a company where Microsoft dominate almost the entire desktop/server environment is very hard to coexist. I’ve used Linux for about 6 years to do my work, by using remote desktop tools, and Virtual Machines I was able to get by, but now that Windows 10 came out, I wanted to take it for a spin, and see how it feels to be a good boy again. so far the experience has been positive. its like an orgasm when everything works without a hitch in my computer, even though I miss the tinkering in Linux sometimes. granted, I just stopped using Linux on the desktop, I still use and will continue to use Linux as a server for the foreseeable future.

I’ve been using Windows 10 for about 3 weeks now, and I didn’t think about an antivirus until now. I hit the Internet, specifically Quora to see what other’s opinion was about installing an antivirus in Windows 10, and it seems like most people think that Windows Defender, the malware/antivirus software built-in on Windows 10 should be enough for most users. 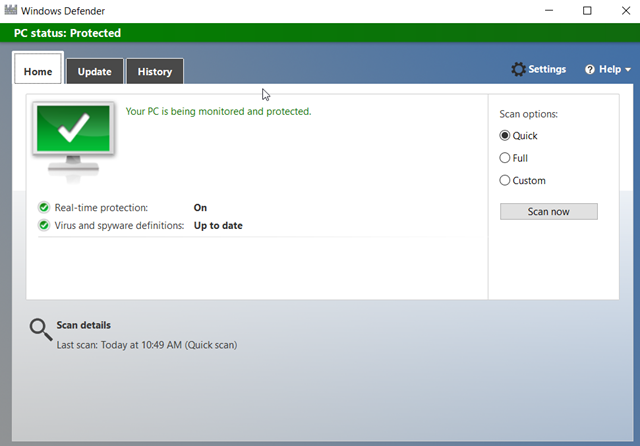 We use Symantec Endpoint at work, and I don’t know if it’s a real protection or just a placebo solution to keep the users at ease because the computers get infected and Symantec does not detect such threats at all, and when it does it just pop-up an alert saying the computer is infected but it does not remove the threat itself. we have to use third-party tools to get rid of the infection.

The best Antivirus and over all computer protection you can have is the user though. if you are a reckless computer user, then your computer will get infected with all kinds of malware quite often. computers don’t get infected with malware on their own, most infections happen because users click or download things they shouldn’t. Always use an up to date browser like Chrome or Firefox, and if you visit shady websites use an adblocker. I don’t recommend people using adblockers in their browser all time because there is a lots of free content available on the web supported by advertisement, but website owners should thrive to keep a balance between their ads and the user experience, and when ads predominate a website, it is perfectly fine to use an adblocker. most websites with so many ads, and pop-ups don’t care about the user experience anyway, and are the websites infected with malicious code. most ad blockers are easy to turn on and off. get in the mode of doing that.

Also don’t ignore system updates popping up on your system tray. Windows 10 is less annoying that previous Windows releases when it comes to updates, and most updates happen in the background without any user intervention, and it will be better if you let Windows handle the update automatically, but if you have to do it manually, do it regularly, so your system is always up to date. Windows defender updates itself very regularly.