In my 8 years working in the computer industry probably the most single question I  been asked is, how can I make my computer run faster? and I always reply with the same answers, remove spam, clean your temp files, don’t let every program to open at startup, increase RAM, check CPU speed, etc. many users don’t know how to do these things, so they are often disappointed with tech lingo. the truth is that without checking the computer’s hardware is very hard to give good recommendations on how to speed up a computer. some people complain their computers are slow when they only have 512 MB of RAM installed in the computer, with that amount of RAM it does not matter how much speed optimization you do to your computer it will always be slow because of lack of RAM. the same goes with CPU speed. it does not matter how much RAM you install on a computer if the CPU is not fast enough, the computer will always be slow. the same goes for the Hard Drive speed, though the speed of hard drives is pretty much standard at 7,200 RPM, but lately with netbooks, and mini laptops I have seen hard drive slower than that, and thus making the computer slow.

The hardware that affect computer speed is, RAM, CPU, and hard drive speed. hard drive speed is calculated by rounds per minute, and normally a hard drive spins at 7,200 times per minute ( there are hard drives that spin faster, and some slower, you can also make a hard drive go very fast using a technique called “cloaking” but this is not the topic of this article ).  so when wanting to speed up a computer, we first need to check for these three component specifications. to check the CPU and RAM specs is fairly simple. just right-click on “My Computer” icon, and go to properties. on Windows 7 the information should be available on the first screen:

as you can see the processor on my laptop is an Intel core 2 CPU with 1.83 GHz speed, and 2.50 GB of RAM. the processor speed on this laptop is not that great, even though the core 2 technology makes a big different on the speed, a 1.83 GHz speed processor won’t perform good on games, or any extensive CPU usage application. on Windows 7, there is a windows experience index  rating from 1.9 to 7.9 that calculates the experience with Windows 7 on the system. as you can see the rating experience with Windows 7 on this computer is 2.8. 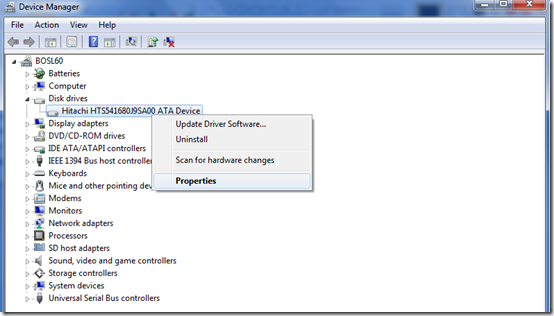 once you get to the hard drive properties, click on details. and then under properties, check the hardware ID: 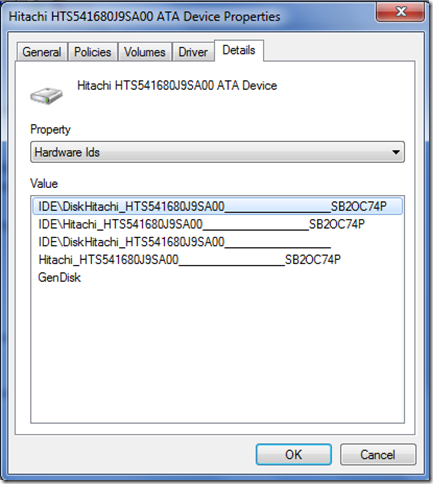 the Serial ID on my hard drive is HTS541680J9SA00. type that serial # on a search engine like Google to bring up the specification for such drive. a quick search on Google reveal that my hard drive spindle speed is 5400 rpm.  so now I have the info necessary to assess my computer speed. what I have is the following:

should I expect my computer to be super fast with this hardware? the answer is NO. first, the processor is not fast enough, and the hard drive is slow compare to the standard 7,200 RPM hard drives. I would say the speed out of this computer is normal. but that bring us to the question, what is the normal speed I should expect from this computer? I should expect applications to open fairly quick, in about 3-5 seconds, the time increases with large applications and with the amount applications already have open, but overall I should have get a fairly ( bearable) speed.

If after finding the hardware specification of your computer and you find the computer is much slower of what it should be, then you can troubleshoot the most software common issues that slow down computers. on my experience the most single problem that slow down computers is “too many startups” applications running. I find that by disabling all unnecessary start-up programs I increased computer speed by 50%. many other computer slow down problems comes by spyware, and viruses. the registry on windows XP is also a big problem, as the windows installation get’s old, many “broken” registry links makes the computer run slow, so running a registry cleaner program like CCleaner is a good idea. bad clusters and sectors on hard drives sometimes make the computer runs slow or on some occasions make the computer“hang” so it is also a good idea to check the drive for bad clusters and index errors. you can easily do that by using the built-in windows utilities found on the hard drive properties.

I know the industry that promise to fix computer slow down problems is big and I have nothing against that, but in reality fixing computer slow down problems by software alone is not realistic. many people argue saying, but when I bought the computer was not that slow, but you also have to realize that when you purchased the computer you did not run everything you are running now, also new service packs, new applications require greater hardware resources than what it was the norm when you bought the computer, so you have to take that into account when assessing the computer slow problem. I’m not fan of software vendors promising people to speed up their computers by downloading a piece of software and magically boosting up the system, by contrast I think this further aggravates the problem by loading another piece of junk onto the system.